How does your garden grow?

Yesterday, my sweetheart took me to the Chicago Botanic Gardens to walk around and look at the Christmas lights and decorations. It was a big surprise, to spend the afternoon and evening wandering around in below freezing temperatures looking mostly and sprawling gardens that--obvious by the overwhelming number of yellow, brown, drooping dead things--was dormant for the winter. But I'd been well prepped, and so was bundled to the teeth, literally, and was as warm as I could be.
Arm in arm, we walked under trellises, covered with twiggy, bare vines, and over bridges, stretching over still water, resting under a rime of crisp, warped ice. We dropped a leaf over the edge, wondering what would happen, and watched, nonplussed, as the leaf rested gently on top, without fanfare or impact.
"We need something heavier," he said. "Here, gimme your boot."
I was able to keep both boots, and we snuck into a greenhouse in the fruit and veggie garden that was still growing a few fruit trees and some edible herbs. After which, we went into the Regenstein Center and looked at three different greenhouses: a temperate one, suitable for houseplants; an arid one, chock-a-block with succulents and cacti; and a tropical one, boasting banana trees (yes, they did, about the length of your finger, and still very green) and orchids. 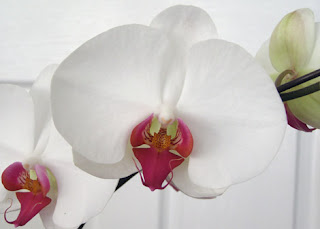 Overhead there were these giant balls suspended from the ceiling, burgeoning with phaleanopsis orchids. They didn't have much in the way of smell, but were incredibly striking to see. The greenhouse was peopled with insects really good at not being seen, that chirped and cricketed away to one another. Evidently, the tropical greenhouse is overrun by one kind of bug, so the horticulturalists have introduced its predator into the greenhouse to fight the infestation. Chatty little guys.

By the time we got out of the greenhouse, the sun had fairly well gone down, but we continued to walk. We discovered that the park wasn't quite as well lit as we'd expected. We walked down a gravel path, flanked on either side by large sculpted trees, arms ever stretching to the sky, yet utterly naked, and managed to climb stairs, up, up, up, to another section of the Gardens. We discovered it to be the Dwarf Conifer Garden, thanks to the flashlighting powers of his cell phone. After a short time whispering and joking in the dark, we came down again, walked back down this path. It was dreamy, walking this path, surrounded by bare branches. This time at its end sat the body of one of the greenhouses, white and red and green and blurry, cut by the lines of panes and the lines of branches, like a giant stained glass window. We went out to the car to get our picnic dinner, ate in the Garden's cafe, and then drove home, lapsing into large bouts of silence, considering the coming holiday.

Winter is such a difficult time for me. The winding down of fall makes me genuinely sad, the time of indoor activities and harvesting what's grown so it doesn't waste, the time of rain and gray and cold and snow. I've never enjoyed the autumn. My sweetheart loves the bright days, crisp like the first bite of raw apple with colors as sharp and sweet, but I know that the sunless sleep of winter is coming, so I always enjoy with a heavy heart. It was a real treat to walk among things that were growing, in warm steamy rooms and know that even in the winter we can make green and fertile and beauty, too.

More than that, though, I have recently found myself frustrated, to the point of pervasive irritation, with what I perceive to be a decided lack of growth in my life. I feel recently like I am in the same place where I was a year ago: like my writing process, despite its greater mass of material, bigger bank of words written, continues to lack the structure and focus I will need to sustain any kind of writing career. My teaching career is a continual, desperate clawing at the industry, one that wants teachers desperately, but will only employ them after a certain level of critical validation. Even my yoga practice, despite my newly-found-but-seldom-practiced headstand, feels in the same place: I'm more aware of the imbalance in my body, but this hip and that shoulder are as tight as they ever were, and are content to remain there.

I'm not ignoring perhaps one of the most significant changes in my life: I'm engaged to a man this year that I wasn't last year. I'm a committed partner this year. I have this relationship stretching before me, its track running parallel to that of my own, and last year none of that was certain. It's not for nothing; it's amazing growth. But it's not the sole thing I can hang my hat on. I'm more than my honey's partner: I'm also an artistic being, and a physical being and a spiritual one, and my sweetheart can do a lot, but encompass all of these things, he cannot. (And thank God for that.)

Here's what I learned yesterday, walking through this dead garden: Nature moves in cycles. There are times when things rise, burst and blossom, times when they ripen and mellow and seduce, times when they harvest, and times when they rest. The hibernation of a plant is critical to that plant's ability to be able to grow. It must have the winter so that the spring can again be beautiful. I was put in mind of how 150 years ago, our lives were governed by the sun, by the turning of the world and the seasons of the year. How modern we've become to be able to fight the elements, to bring sun indoors in order to work when we should be resting. But is this the thing we need, is it what's good for us? I am fighting the idea that there is something happening inside me that is utterly unmeasurable: I want results. But now may be the time of the work happening on such a deep, imperceptible level that I can't measure it. This work is as important as the work of what can be seen. If I don't do it, maybe the blossom in the spring won't be, or won't be as genuine, or as fantastic as it could be otherwise. I have to let myself look static and dead on the outside for this season, regardless of what's happening around me, regardless of how I feel inside. Without the stillness and the rest, there can be no movement.

None of this makes the stasis of where I feel now easier to bear. But it makes it meaningful. I don't know if it's particularly Christmas-y, what I'm saying. I know that at this time of year I get really reflective, and January holds this giant upsweep of forward moving energy for me. But for now, I just have to try and be comfortable with the stasis.

Posted by Jessica Young at 6:24 AM