I don't have a lot of words lately. I don't want to fill up any space right now with explanations, I just want to do what I'm doing. So this is what I'm going to do here. 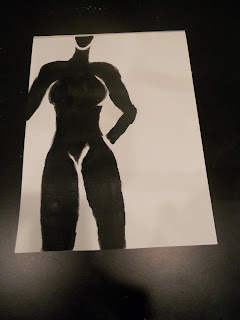 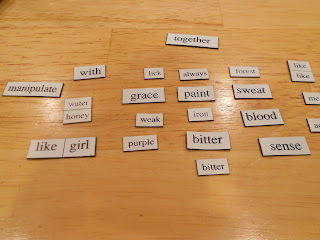 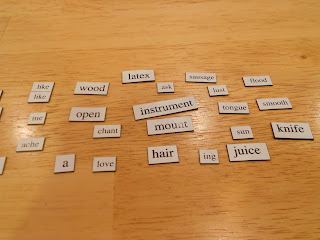 My husband is smart; he knew before I did that what I was fashioning was a self-portrait.

From a journal in 2007 (because I've been going through them lately):

If you want shiny lips you have to use the candy-flavored lipgloss on top. Brenda likes to wear it plain without anything underneath, but I always wear it on top of lipstick. It makes my lips look great, so shiny and red it's like they're practically made of vinyl.

Now that it's getting warmer the girls are starting to wear the tiny tight skirts we all used to. They wear them bare-legged with those little flats, leather or canvas. I'm still rockin my skintight jeans. I'm curvy the right way, and my legs are really skinny so they always look good. Brenda and Marisol can wear those shirt skirts really well, and Marisol has great legs, kinda creamy and muscular that look really good in those tiny skirts. But poor Callie, she's a year behind the rest of us and still flat as a friggin board. She doesn't have any hips or ass to speak of, so she's just better off wearing baggy stuff and showing off her midriff and her nonexistent tits.

We spend most of our time on the streets: that's where the action is. We get looks from all kinds of men. Callie and Brenda are content to fuck around with guys from Clemente or Lane Tech, you know, boys our own age, and Marisol will sort of go with the flow. She gets her fair share of looks and stuff but I don't know if she's even into guys. The whole time she's out here, she has this real dead sorta look on her face. One afternoon she was talking with this guy who was driving a black Benz two-door, and she stretched her tight pink lips into a smile and she talked to him, but the whole time her eyes never lost that vacant dead look. She got in his car and they disappeared down Halsted, but hell only knows what happened. We didn't see her again for a couple days and when she came back she had the same vacant look.

The thing I like about it is the tease. You're out there, and you're all dressed up, and it ain't like those tight ass Lincoln Park housewives, or this sick little single girls that fry their hair flat and teeter around on high heels that they meet in bars. They see me, in my skintight jeans and my jacket that's just short enough to show my ass, and my perfectly white Reeboks, and they know I'm tight. They know my body is new and fresh, so fresh it crunches when you bite it, and their mouths water. They think, look at her, she's young, she's anonymous, she's probably never had it before, so good or so hard or so big as I could give it to her. They don't know what I know: that they aren't anything special, that I don't put out, I only suck dick, and that most of the time they won't even get that. They ask me if I want a ride, and it really doesn't matter where they're going, I'm probably going to get in, but I gotta make them think that good young girls like me don't get caught dead with grown men, with my hand down their pants or their hand down my pants, doing dirty things young girls like me know nothing about. All this is still in the future, and they look at me from behind the steering wheel, their eyes questioning and lips curling in anticipation.

And then I know I can have whatever I want.