put a face to it

"When I dare to be powerful--to use my strength in the service of my vision--then it becomes less and less important whether I am afraid." --Audre Lord 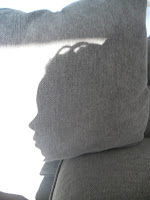 I stole this off my friend's blog this morning. This kind of thing has been on my mind for weeks now. Tied to the question (that was for a while, but seems no longer to be, a burning one) of whether graduate school is right for me, is the notion of who I want to be, what I want to make, and how to put that information into the world. Do I want to be the academic with the posh leather briefcase who rides her bike to campus and invites her students over to her dark, book-filled home for finger foods, a little wine and some philosophy? Or do I want to be the writer who writes, the artist who values my skills above almost everything else and does everything in pursuit of them?

The thing about succeeding as an artist is that people have to know you--they have to read your work, see your shows, they have to follow you in some capacity. You have to have talent, skill, a working knowledge of your craft to be sure. But you also have to have the confidence to put your stuff out there (and over and over and over again, because you will almost certainly be rejected out of hand). You have to respect yourself enough to want to be heard. I've been following this blog lately and its writer recently launched a newletter of her creative stuff that you can subsribe to for five dollars. I thought it was such a courageous and appropriate thing to do. From my end (and I'm sure I'm putting words in her mouth) it seemed that she's taking herself more seriously, and wanting to respect herself and her writing enough to make this kind of leap. I respect it. My friend the painter taught me that you should always pay artists what they're worth; the world doesn't value artists enough, and unless we take ourselves seriously--and often, the price tag is the only thing anyone takes seriously--than no one else will either.

But that's really hard for me to do, and I'm not sure why. Maybe it's because so much of what's out there is projection--mine, yours, someone else's--and not reality, and I don't want to put a false self out into the world. And I could: I've had a lot of training in false selfs. Maybe it's because I can't tell the difference between self-promotion and arrogance. I don't want to say and do things in pursuit of, "Hey look at me," and be mistaken for a smug, arrogant know-it-all who doesn't believe that she has anything left to learn. I find the idea of drawing attention to my successes really difficult, but given the world we live in, if I don't say it, and I don't hire a publicist, than no one else will. The world--by which I mean the media and entertainment industries--have made a killing out of not very bright people jumping up and down and setting their hair on fire. If the art I'm building is about anything at all and I don't put it out there, it's gonna be run over by all the shit that's saturating the collective conscious.

At a meeting last week I had the hardest time telling my colleagues I'd been selected as a finalist for a teaching award. I don't know how good my odds are of actually winning, but it's nice, at my age, to have made the short list for something like this. But I almost choked when I said it, and I'm sure the look on my face was a perfect blend of terror, hope and mortification. Why should that be? Is it the culture of the community? Maybe; but that's too easy, to say that those people make it hard to share good news with--because really, they don't. The reality is I'm just terrified to ask others to look at me and respect me for the talents and skills I've developed.

But that's a very real block. If I don't do anything about it, it's going to hold me back in a profound and permanent way. So, I have to use my strength in service of my vision. I have to be cosistent and aggressive about seeking exposure and opportunity, and I have to do it now and keep doing it, because I believe. I believe I have something to say, something to say that someone has never heard, and that someone else doesn't want me to say, and I have to get it out there. If I am strong and motivated, and working in service of my goals, I can walk through fog without caring that I can't see the ground beneath me.

Posted by Jessica Young at 9:37 AM