I saw this poster on Dearborn and Congress. I took a lousy picture of it with my camera phone, so it's hard to see. 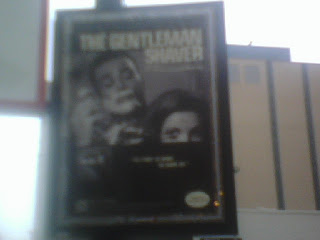 It says, The Gentleman Shaver. Member, the Brotherhood of Shaving. "'He-time' is hard to come by."

Later I discovered a film that matches.


The Gentleman Shaver (Dir Cut) from Ben Briand on Vimeo.

Isn't it charming, with the man his bowtie rakish and handsomely slack, his trim body bending like rubber, and his lady friend, scantily clad and blissfully unaware, so caught up is she in her own grooming. With the black and white, and the French music, ooh la la.

There's a comment here, in all the work I've been doing about what it means to be a woman who cares about the way she looks in a world who demands that women look a certain way. It's percolating.
Posted by Jessica Young at 9:08 AM