I've been writing about the recent change in my life the last couple of weeks, trying to decide if this is just an interesting thing in my life or if it's material. In this world of zillion ways to get your voice out (including this one) it's hard to know sometimes if the amazing chicken sandwich you had for lunch is just your good fortune, or if there's some universal truth hidden in it that the world needs to hear. (Maybe it's not hard to know--maybe a sandwich is just a sandwich and it's nobody else's business. Maybe my lunch menu isn't going to change anyone's life, despite my best intentions.) I've been collecting tidbits of story, some short, some long, around beauty, identity, makeup specifically, and I thought I'd catalogue some of them today.

I am standing in front of my bathroom mirror considering my face. My chest-length locs are pulled back in a messy bun and I have a red bandana tied around my head. I’m wearing a white tank top and black yoga pants that have seen better days; and beside my right hand on the counter is what looks like a torture device.
The box does not say what it should say: eyeball scooper; finger dislocater; at-home speculum; tongue pincers. This one handy device can be used to remove any and all small appendages that offend. Hours of fun and torture sure to follow.
No. The box it came in said Eyelash Curler. It said, Great Lash; lovely; beauty; care .
I’m a 31-year-old black woman and this is the first time in my life I’ve used an eyelash curler.
How did this happen?
*
You have great legs, my mother would say You ought to wear short skirts more often.
*
I can’t figure out what I was doing in high school when other girls were learning about makeup. I have this fantasy of teenage girls learning about makeup from their mothers, who had hours of free time to spend with them and were only too pleased to teach their girls about the difference between foundation and setting powder. I think I was studying. Practicing the clarinet and reading, always reading.
I remember having acne as a teenager. It wasn’t incredibly bad, but it was bad, bad enough that I worried that people were staring at my face well into my 20s. I used a bar soap called Cuticura; it was baby blue and it smelled like antiseptic and it tried to control my unruly skin by drying it out. I would wet the bar of soap and a Neutrogena textured scrubbing pad, labeled good for “exfoliation” until they were frothy with suds, and then I’d scrub my brown face until it was red. I was looking for those dusky smears that would indicate I’d gotten all of the dirt and oil that was in my pores out. I’d rinse my face with water as it as I could bear it and then towel it dry. Sure, there was a moisturizer, but as often as not I wouldn’t use it. I believed my skin was oily enough, otherwise I wouldn’t break out the way I did, right?
*
You feel like your face is dressed, not covered--what one of my best friends said about her relationship to makeup.
*
At American Apparel, a girl used the phrase, "this season" to me. As in, "Purple is a really popular color this season. Purple and orange." What's in from one season to the next has never been something that helped me decide what to buy or what to wear.
I bought the purple scarf.
*
Next to being beautiful herself, almost the nicest thing that can happen to a woman is to have a beautiful daughter.-- from an anthology called Beauty edited by John Miller.
* 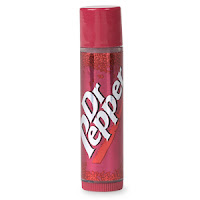 I remember owning a Dr. Peppers Lip Smacker and thinking I was the shit.

I remember rubbing Retinol-A cream on my face until it peeled.

I remember the stress from my job at a beloved non-profit stressed me out so badly that I broke out in horrible, offensive acne, the worst it had ever been, the kind that made you wince just to look at. I avoided mirrors for months that year. The teensI worked with would ask me, What's the matter with your face? and I would say, The stress of dealing with you everyday is breaking me out.

I remember cutting off all of my permed hair until it was super short. I felt sexy as hell.

I remember when I came home with my hair cut short, my mother started to cry. She was sure I'd done it to get back at her.

I remember watching my mother put lipstick and mascara on.

I remember being scared to make risky fashion decisions. I thought people would make fun of me.

I remember wanting to be looked at and wanting to hide at the same time.

I remember railing against women who wore makeup. I thought they were fake and excessive and trying too hard.

I remember learning it was okay to want to look pretty.

I remember my dad calling me Princess, in a pejorative teasing way, like he thought I was weak and afraid to get my hands dirty.

I remember my dad calling me Goose, like he loved me, thought I was sweet little buddy that he wanted to hold close and take care of.

I remember getting a makeover at Bergdorff-Goodman in Manhattan, and getting a business card from a modeling agency rep, and thinking maybe I was pretty, after all.
*
There is a quality of beauty that happens in secret. She sends her husband to the store around the corner for bread and milk, and her kids out to play, and she sets her hair in pink foam rollers, goops her face up with cream and cucumber, waxes her upper lip, tweezes her eyebrows. By the time everyone gets home, she is washed, powdered, styled, coiffed; it is as if all of that other carrying-on never happened. when her kids tell her how pretty she is, when her husband looks at her in wonder that he managed to score such a looker, she smiles to herself and thinks, Thanks, Clairol/Elizabeth Arden/Ponds/Neutrogena/Sally Henson!
My mother hid her own beauty rituals. She seemed embarrassed by her own body, as if the hair that grew from her own legs were traitorous, the fuzz that sprouted on her upper lip a disgrace. If my father or I ever happened upon her when she was in the middle of her toilette to deal with these obscenities, she would snap at us, her voice a hiss of frustration and humiliation. "Jessica!" she would say. "Steven! I need some privacy!" And she would scurry off to the bathroom, her head lowered to avoid the horror of being discovered. Later she would emerge from the bathroom, a bit subdued but still rankled. "You weren't supposed to see that," she would say, as if one of us had planned to leap out and discover her waxing, peeling, plucking or powdering whatever she'd hidden from us.
*
I guess you think you're cute now, huh?
Yeah. I do.


So this isn't all of what I've written, but it's some of it. I am interested in the idea of makeup being this enormous industry/polarizing practice/signifier of gender/evolutionary habit/historically significant idea. But I don't know. Maybe the fact that I've started wearing makeup is only interesting to me. Maybe most women have been wearing makeup for years and most men only think women wear it to attract them (ick. I have read my fill of internet troll comments from dudes who are all, (deep, frat boy voice): "why do chicks wear so much makeup? You look better natural, I'd never hit that." Here's a clue, dudes. Makeup has nothing to do with you. Despite what Mommy told you, the sun doesn't rise and set in your pants. Get over it.). I don't really know what I have to say about this, although it's clear I have something to say. Still percolating, I guess.
Posted by Jessica Young at 12:13 PM

I began wearing make up after realizing that a modestly made-up face is more professional than a makeup-free face (or than a heavily made up face). For work, I purposefully put on just enough makeup so you can tell I'm wearing makeup. Eye shadow is great for this because you can go light on it, yet it's obvious that your eyelids aren't naturally that color. For non-workdays I wear only lipstick. I admit that I feel naked without lipstick.

I remember being on a bus in junior high and someone saying, "Oh my gosh! You don't shave your LEGS?!" and suddenly feeling ashamed of something I had never once thought of in my entire life prior. (Honestly, who thinks about their leg hair until instructed to do so?)

I want the security of assimilation, but at the same time I want to be unique and independent and not care about what "must be done." So I manage to meet basic social standards for beauty, but I still cling stubbornly to things that give me the comfort of feeling I'm not conforming ENTIRELY: never using hair products or getting highlights, using tiny hotel shampoos - and only once a week, using an epilator instead of shaving, using olive oil instead of lotion... and the list goes on.

But a few weeks ago, after many agonized mornings of coaxing my hair into socially acceptable submission, I tried mousse.

That shit is amazing.

Maybe I'm giving in to the machine, but it sure is nice to feel pretty every day, even if someone else is defining it for me.