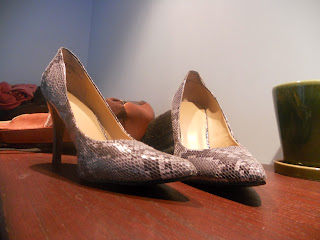 I've been taking classes the last several weeks at Tejas Yoga. Every time I go in, I notice these shoes. They're on the coatrack in a kind of makeshift Lost&Found.
"Look at those shoes!" I said to the guy who checked me in one evening.
"I know, right?" he answered. "They've been there for months. We've made up stories about the woman who left them here."
I stared at them a while longer, tugging off my white sweat socks and grabbing my mat. Who is the woman who walks into a yoga studio in fierce snakeskin heels and who walks out forgetting them? What happened to her in that 90-minute 80-degree class that made her forget her shoes? Maybe the spring day was so nice and the yoga felt so good that she decided that she wanted to walk down the street barefoot and feel the concrete of Wabash Avenue underneath her feet. Or did she have a pair of kicks, or flipflops, in her tote bag and she was so blissed out after all the stretching and pranayama that she just forgot they were there?
Or did she undergo some special, magical, life-changing decision on her mat? Did she realize, after the chakras and the sweating and the purifying that she'd somehow contributed to the suffering of a fellow creature by buying and wearing those shoes? Did she, in that moment, experience a profound understanding of ahimsa, convert to a vegan lifestyle, and choose to leave these shoes behind, no longer bound by her old ways of life?

My mother told me a long time ago that people don't change; generally, you wanting them to be different than they are isn't enough of a motivator for them to adjust their behavior, and they're just gonna keep doin' what they do. (She said lots of other things too, things that were as potentially damaging as this could be: any man who lives with you for more than six months without proposing is using you; watch the way you dress, you don't want to be one of those girls who's just asking for it; white people look at you and they think what they see in you is true of all black folks--I know now she was speaking out of a profoundly painful life experience and that she was trying to spare me her past injury, but man: let's just say I'm investing a lot of time and energy (and money!) in cleansing my self of some these principles.)
About people changing, I've sometimes thought that she was right. I remember having the same arguments with several women I used to know, over and over again, and wondering why we were stuck in the dysfunction loop.
But she's also totally wrong. I've been married for less than two years and already I'm a different person. My husband looks at me and comments on my language and how much I sound like him. I don't just ditch the paper bags we collect recyclable goods in, as I used to, I reuse them. I'm more analytical than I used to be. I'm more considerate. I listen better. I may even be more patient. I've gotten lots better at expressing myself in a self-focused way (as opposed to you you you, what's wrong with you, you make me feel X), and I've also gotten better at saying, Hey, you hurt me, even if the other person can't handle hearing that.
I can lay the bulk of these changes at the fact that I've married one of the greatest humans I've ever met, yes. But I can also say that I want to change. I look at myself a lot and think how might I do this better--live, write, relate, teach, listen, eat, sleep, exercise--how might I create a practice that makes me feel better about some part of my life?
I just read a photo in a blog about where Ryan Gosling meets radical sex ed* that argued that the new year uptick--"it's a new year, and your opportunity to a great new you" type thing--is tantamount to self-hatred. Maybe for some people it is. But change is as universal a part of the human condition as loss, pain, joy, growth. Maybe change is like growth more than anything else: that which doesn't change, dies. I don't know. I know there are loads of us on journeys of self-acceptance, of creating tolerance or beauty or awareness in the world, of writing policy that treats all of us as equal citizens in the world. (and don't kid yourselves friends; even after the good fight for marriage equality has been won, there will still be plenty of second-, third- or even lower-class citizens without a voice. A look at our current justice system should show you that.) Part of this journey requires change: change in the hearts of our legislators, change in the hearts of our neighbors, change in our language, in our speech, in our hearts and our thinking and action. If this change comes from a place of shame or hatred, for our selves or others, it's no good; but if it comes from a desire for a better life for all of us, maybe that's okay.

When I started dating the man I married, I'd decided to stop eating meat. I'd spent the summer working grueling hours teaching around the Midwest, and I'd been struggling to take care of myself under such a tight schedule. My yoga practice was becoming a serious part of my life, I was about to make a big move away from one of my closest friends, and I was undertaking the first large-form creative project I've ever done. There was no juice fasting and vision quest, no wandering in the desert for forty days, not even a silent prayer asking for blessing or guidance; I just did it. I stayed that way a vegetarian for almost three years, through plenty of great dates, and some awkward ones, through some bad news about my body--unrelated to dietary choices--and some other changes to my diet that weren't as easy to navigate, through a graduation, several dinner parties and some truly unpleasant family holiday observances. Then, right before my husband and I married, I decided to start eating meat again. Neither of us were sure if it was a good idea. But I didn't like the idea of refusing food that someone had set before me with their grace and joy, because I don't eat that. So on my honeymoon I ate Kalua pig and poke and lomi-lomi. It was great. It's been almost two years and I've spent the bulk of them omnivorous.
But recently I've drifted back the way of the meat-free. While eating meat and fish provided more options than existed when I was a gluten-free vegetarian, it never really felt satisfying. I often felt sluggish, quite like a python post-antelope. Heavy, clogged, fortified to the point of overstuffed, and inert, in as many ways as possible. At the start of 2012, the Husband and I made a commitment that we'd try to take more vegetarian meals; I was really bummed that so much of our diet had become animal-based, and we're both on the lookout for ways to make healthier choices for the both of us. Not long ago, I saw Bryant Terry give a convo and cooking demo, and I felt convicted in the loveliest way by some of the things he said. The least of which was his charming freestyle interpretation of this Boogie Down Productions classic

So I came home and listened to this, and while I've rarely been the person who didn't eat meat because she loved animals, it hit me. Not hard, not like Food, Inc. or Earthlings, but still. I'd never heard this song before. I'm pretty sure I was ten when this song came out, far from hip-hop, instead all caught up in Michael Jackson, New Edition and Al B. Sure. Terry talked about what a transformative experience this song was for him, how he became the guy everybody loves to hate, in your face about what you're putting into your body and what it does to you*. That didn't happen to me. But something happened to me. I came home from that conversation and demo galvanized, certain of something I'd been waffling over for months. I'm not using any labels to describe it--maybe in that sense it feels like a new kind of relationship--but I know it's there.

Which brings me back to the shoes. They're hot right*, and I know, I know, high heels are the devil, but I can't help it, I really like them. I've begun to accept that: I'm a woman who likes to wear high heels, not because it's professionally advantageous or because of anyone else's standard or because I feel like I have to subject myself to painful footwear in order to be taken seriously or conform to some majority-culture beauty standard, but because I like the way they look on me. No, I did not sneak out of the studio and try them on to see if they fit, in case you were wondering. I'm content to admire them every time I'm there, and wonder about the person who left them behind, and if they ever miss those sassy snakeskins.
May the changes we want to make, the changes we make freely, whether easily or hard-fought, be as easily left-behind as these pair of shoes.

*This blog is interesting, and while I'm not sure I understand it, and it sometimes provokes frustration in me, I think it's compelling.
*For the record, he's not that guy anymore. He identifies as a food activist, someone who uses food to bring about social change within the African-American communitiy.
*The only thing that would stop me wearing these shoes are the actual snakeskin. It's not an animal-treatment issue; I think snakeskin--gator, too--is really creepy.
Posted by Jessica Young at 11:18 AM

Nice post. I can relate to your conflict over meat/no meat, heels/no heels. sometimes it might be nice to be an unenlightened woman and just put on the heels and chow down on a steak. yup.

A friend just started a blog called "Leave It to Vegan" http://leaveittovegan.blogspot.com/

It looks like it has (and will have) some pretty good animal-free recipes.

I try to avoid wheat, dairy, sugar and processed foods and it's not easy, but I am a total meat-eater. Good for you to know your body and what it needs/doesn't need.

Thanks, Reg. I appreciate the link. I'll check it out.