When I was younger I learned about a concept called Jubilee. I remember being a young girl and listening to Christian radio in my dad's car on the way home from after-school care and hearing this song come on the radio with this chorus:

According to Wikipedia, "The Jubilee (Hebrew yovel יובל) year is the year at the end of seven cycles of Sabbatical years (Hebrew Shmita), and according to Biblical regulations had a special impact on the ownership and management of land in the territory of the kingdoms of Israel and of Judah."
Now, while I have not done anything--anything--for forty-nine years, I love the seven times seven repetition in the narrative of the Old Testament: the seventh day as the day of rest in Genesis; the seven times, once a day, that Joshua and his army marched around the city of Jericho, and the seven times they marched around the city on the seventh day before they blasted trumpets and knocked the walls to the ground. But when I think about the jubilee year I think about the seventh year, not the seven times seventh year. Seven is a great number. Lunar cycles are broken up into multiples of seven. Seven is a lucky number here in the west, and according to Chinese astrology, so many lunar festivities are completed on the seventh day because seven is the number of completion. So maybe seven has this cosmic, spiritual vibration to it that somehow makes sense to me.

On a tangent, I want to take a moment to say that right now, I have a hard time with worship music. I grew up with it as a constant soundtrack for family interaction, and it never played an organic role in my personal worship experience. It wasn't soothing or motivational or positive for me; in fact I have memories of being forced to sing worship music, for reasons that had nothing to do with worship. That kind of behavior was really effective at distancing me from typical worship practices. I'm carrying a lot of baggage that I can lay at the feet of people I've come in contact with through various churches and worship experiences. So while a spiritual narrative can make me feel warm and connected to something larger, worship music just generally makes my skin crawl. But this isn't a post about the ways I've been failed by the church, or about the frailty of man, or about the struggle to make meaning and connect to Something Larger.
This is a post about black hair.

Specifically, my black hair. March marked the seven year anniversary I started locking.
I've written about locking before, about the politics of black hair and it's something that I think plenty about, even when I'd prefer not to. So I don't know how much time I'm going to spend talking about white beauty standard and idiot talk-radio hosts who make thoughtless and racist remarks. What I've been thinking about is my own journey, why I locked in the first place and what I've been learning as a part of the process.

But first, a lesson/rant: I hate it, Hate It, when people call locked hair dreads. Maybe it's because I'm a writer and I deal in words, but I have to ball my hands into a fist and bite my lip to keep from correcting people when they talk about "dreads". I have had people I thought were close friends who called my hair dreads, and it was all I could do not to correct them and say, Listen, my hair's not dreadful, it's beautiful. I don't have dreads I have locks. I should have done it. Now I wish I had corrected those people; they still don't know any better for my "politeness". The term "dreadlock" came from British imperialists in Kenya who saw the way men and women wore their hair--they labeled the style dreadful locks, and a moniker was born. I hate the idea that the anyone would name a style dreadful, and for me it's not a word like "nigger" that's been reappropriated; it's just wrong: sad, hurtful and ignorant of what the hairstyle really has to offer.

I locked my hair in 2005. I'd been natural, that is not treating my hair with any chemical straightener or alteration as black women in America often do, since '02, and I'd begun to think about locking my hair. I'd heard my mother talk all kinds of junk about Whoopie Goldberg, who was the only black woman I'd ever seen with locks. But I kept seeing people with locks, and I started to research the hairstyle. I discovered that locking was for some people just another way for a black woman to wear your hair natural, but for others it was a very real, natural, spiritual choice, an expression of connection to God, a vow of devotion and spirituality. I really responded to this. So I locked.


I don't know if I had a lot of expectations of wisdom to descend on me through my scalp after this choice. I know I wasn't going to spend hours in meditation, like Hindu monks, who called their locks "jata" . I didn't know if there was a trip to the Motherland in my future, or that I was portraying any devotion to Haile Selassie. But I vibed with the idea that locking was going to connect me to something larger, that my hair would serve as roots to put me in touch with a kind of wisdom and understanding. I wanted some of that on my plate.

My hair's gotten me some attention. Much of it is really good. I feel a kind of kinship with other locked heads (male and female) I see, and when our eyes meet, we share a mutual respect and honor for each other. I remember listening to a story that a women told to me one afternoon after church about her recent trip to Zambia, and how she felt truly so much a part of the culture there, despite being an American, because of her locks. I am consistently complimented on it by people who express their admiration respectfully, thoughtfully.

Not all of the attention my hair gets is good. I don't, for instance, like it when people (often, but not always white) touch my hair without being invited. This also happened a lot when I was wearing my natural very short. I want to remind folks that I'm not a little dark genie for them to rub for luck. I also do not like it when men--of all races, ages and persuasions--holler things like, "Hey, Natty, Natty," at me, as if that will turn me away from whatever I'm doing and send me running toward them, ripping my clothes off. In fact, some of the attention I get from men who have no idea what it means to be locked is pretty crass. When they say things like, "God, I love your hair," I try to answer back, "Thanks, me too," and change the subject so I'm not inviting them to subjugate and objectify me further.

But here, now, on the seventh anniversary of locking, I've been thinking less about how others respond to my hair and more about what being a locked head has taught me. I didn't know it at the time, but I believe locking my hair is one of the first steps that I took to moving closer to the center of myself--the center of my self. I am a truer version of myself, a healthier, more whole person, because I locked my hair seven years ago. I am learning to accept my reality--my successes, my weaknesses--because I locked. I am learning how little there is in my life that I can control because I locked; and I've learned about others, and their struggles on their journeys to the center of (and sometimes away from) themselves.

It's not for everybody. It's not what makes me hot. It doesn't mean I'm a hippie. It is, in some contexts, a political statement. But now, in my year of jubilee, my locs are a reason to celebrate, and a quality of myself that does help keep me rooted to the Earth, and the Something Greater. 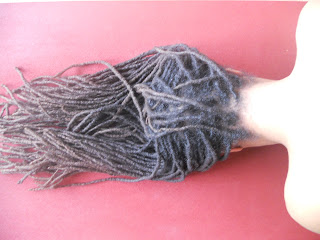