This past Monday was June 4: also known  to those of you up on your history of human oppression of peaceful citizens as May 35th. I recently read this article, which I think handled it pretty well. I have to stay humble about this, because I got schooled. I remember snatches of footage, especially this one. 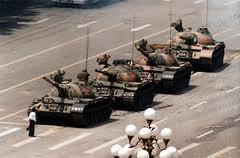 But I was one of those folks blithely content to let others' misfortune not affect me. It can't anymore. I feel profoundly the need to keep telling the same story over and over, so we don't forget, so we can work against the monolithic force to erase history. It's my job as a writer to tell the story of those who are silenced, so we know, remember, the world we live in, and not change it by forgetting, but by growing. When people tell me--as they did this week--that they don't know what the Tienanmen Square massacre was, my heart breaks, and I have to tell my face not to freak out. I have to remind myself not to judge them, but to tell the story. Their ignorance just means the history erasing machine is winning. Sigh. But I don't speak about it well. Somehow it gets all wrapped up in my deep emotions and I can't make the words come out. 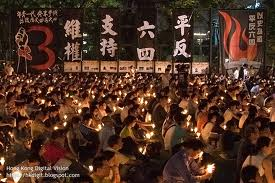 He tells it better. He hits it home in a real way. CP Chang, take it away.

Imagine that 23 years ago, a hundred thousand protesters showed up in, say, Times Square, to protest government unfairness, economic inequality, and the stranglehold on power by select insiders.

Imagine that these original Occupiers were rousted by the government, but with local police wavering on whose side they are on, the government brings in the military. 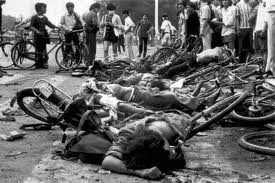 Imagine tanks rolling down, say, Broadway, and the Square filled with tear gas and shots fired, and several hundred, maybe over a thousand, maybe the population of both World Trade Centers on 9/11 being massacred that day.

Imagine that no one actually knows how many people died that day, because the government clamped down on the press, allowing only the stories they wrote to be published, and arrested anyone who dared to speak their stories publicly for "violating national security".

Imagine that 23 years later, children who grew up after the massacre would know nothing about it, the truth being erased from history books, and that internet censors would block out any mention of the event, or even of that date in history, but even the censors work was becoming easier, because the world stopped caring.

You'd have to imagine, because really, how could such a thing happen?
Posted by Jessica Young at 10:17 AM

Thank you, Jess. I was in grad school when this happened and can't forget it, but I'll read this article to remember the details. I really appreciate you bringing attention to it.