On My Yoga Mat, Humility and The Fire of Cleansing

for Cristina Correa, because she asked me to

I'm one of those people. You know, those men and women you see on the street with the yoga mats in a bag slung over their shoulder or across their chest? That's me. I heard someone (an stand-up comic? an angry friend?) say once that if he saw another person with the movement clothes and the yoga mat bag, he was going to punch them in the face. I guess we are pretty ubiquitous, and if you think it's serious here, try LA or NYC. You can't swing a Hanuman without hitting a yogi in those cities.

(That's a bad yoga joke. See, Hanuman is a Hindu deity also known as the Monkey god who has a yoga pose named after him for his . You know, because monkeys have tails. The original phrase is you can't swing a dead cat without...? okay, I'm letting it go.)
Anyway, for a while I took these words to heart: I shrank into myself whenever I had to run the streets with my yoga bag--to and from school, when catching a class after work, or even commuting to studios on my bike. I felt like I was one of those insufferable yogis that people who don't practice yoga come to hate. I guess my saving grace is that I don't have 90-dollar yoga pants that can post special vented comfort or sweat wicking; I don't have the standing mani-pedi appointment at Bliss to keep my toes looking all sweet and tidy when I'm in wide legged forward fold (although, candidly, I covet those pedicures. My feet, while not hideous, bear the marks of someone who works them hard, and I would love to have tidy, pretty red toenails to admire during my practice. But wishing for this feels decadent; having cute toes might get in the way of all of my super-holy prana being moved around).

But I am one of those insufferable yogis who will talk too much about her practice, about what she's learned on her mat, about where she feels her energy blocked and I do have the fancy-pants mat. Years ago, when I realized that yoga was becoming a real, significant part of my life, I made an investment. I looked at Manduka, the popular black mat that one often sees at classes, that teachers are always unrolling in studios. They have a great ad campaign, rooted in the idea of what you and your mat do together: that inversion workshop across town, the two weeks you broke up with your girlfriend and couldn't stop doing sun salutations to get her out of your body, the workshop in Costa Rica, like that. It's cute, and the mats seem nice, but I went a different direction. I bought a Jade mat, not swayed the ads featuring yoga rock stars (Shiva Rea, Dharma Mittra, Duncan Wong, Faith Hunter, Nikki Myers, etc.) who pose in provocative or blissful positions with theirs, but because the mat's made of natural, sustainable rubber, because reviewers said it has great grip (and enough down dogs that ended with me face first on the floor taught me to seek good grip) and because they work with a charity that plants trees, and for every mat purchased, they plant a tree. 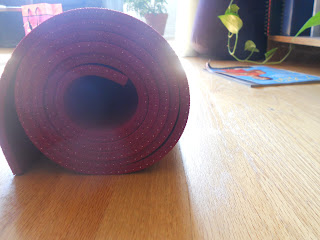 I love this mat. I love how thick it is; whenever I do kneeling poses, I never have to double up. I love the color, the website calls it "Sedona Red"; "Tibetan Orange" is nice too, although perhaps a bit too bright for someone with my temperament. I love that my hands stay put even when they're sweaty. When it came, it smelled strongly of rubber, and I loved the smell that would waft up to me from the floor.

It's heavy. Taking it with me is a commitment; I better do some yoga if I'm hauling around a mat that weighs, like five pounds. It barely fits into my cross-body yoga bag. For the record, I have other yoga bags (people never know what to buy you when they find out you're into yoga, like the standard journal gift to a writer), but I make it fit anyway, because it's my favorite bag. When I wear that bag, with my mat inside, heavy and certain, bouncing against my hip occasionally as I walk, I feel powerful, I feel strong. I feel like a warrior, like an archer with a quiver of arrows ready to take aim and fire.

I have solved some serious writing (and teaching) problems on my mat--or at least brainstormed solid solutions. I have felt the joy of understanding drench me in stillness. I have NOT, as I hear so many other yogis say, had a spiritual experience in pigeon pose: no sobbing or giggling or transformative discoveries. I feel my hips opening something fierce, but that's about it. I did my first headstand on this mat, I do occasional 2-second bakasanas on this mat, and I remind myself as often as I can to detach from the consequences and the results on this mat.

The top is crane. The bottom is crow. They both have the same Sanskrit name. Can you tell the difference?
Lest I give you the completely wrong impression of my practice, let me say that recently, my yoga mat has been a place of ass-kicking and humility. Several weeks ago I started practicing Ashtanga yoga, which, like many things yoga, has a hillion jillion different definitions*; I mean this kind of Ashtanga. The primary series is known for organ cleansing and muscular-skeletal alignment. It's called yoga chikitsa. Yoga therapy. (I know, right?) I'm working as far as janusirsasana A, which is to say, not that far into the primary series at all, if you know it. Every morning for the last two or three weeks, instead of scribing out a practice on a scrap of paper (as I'd been doing the last several months) or going with the flow, I commit to a strict series of poses. They're all familiar: sun salutation A and B; forward folds--standing and seated--that test my ability to surrender; hip openers for which I have such narrow range of motion that I wonder what is locked in my pelvis; balancing poses that have me appearing a broken-limbed flamingo and make me want to cry with frustration; and more vinyasas than I can do. This doesn't feel like worship! I think as I am soaking a hand towel with my foul smelling sweat, and trying (and failing) to soften my jaw. This feels like torture. I am so locked out of this practice. I can't do this! Why can't I do this?

I am wholly unaccustomed to feeling like I can't do yoga. I started practicing when I was 19. Yoga came along right before a descent into a pretty dark time in my life, and it was one of the tools I used to climb out of there. It's one of the longest relationships I've ever had. You might not know it to look at my practice; oh, there are SO many poses I can't do. What I mean is that yoga, and especially my yoga practice, is a place where I rarely encounter--well, failure, as it were. I take the modifications that I choose, but even that doesn't feel like failure; it feels like attentive listening to my muscles and joints. I like yoga because it makes me feel whole, it feels challenging but sustainable. The classes I take, especially my home practice, it all feels within my grasp. But Ashtanga is just wiping up the mat with me. I really do feel locked out.

Is this what worship is? I've read plenty of literature about the ability of a practice like yoga to help you create a spiritual awakening, connect to and release trauma stored in your tissues, about asana as a part of the path to enlightenment and oneness with the Divine. Maybe there is a kind of worship in such wrestling and flailing and struggle that feels like anything other than me looking and feeling like a crazy, wheezing fool will never be. I suppose that even now as I feel humbled by the limits within myself I am confronted with every morning, I can acknowledge that each limit is an opportunity to release any desire for growth, achievement, result (which does not come easy to our Western minds--we've got that brass-ring/American dream/goal-oriented perception of life locked and loaded). Do your work, says the sage Patanjali, and don't think about the results. Practice, and all is coming, says the late Patthabi Jois, the father of Ashtanga vinyasa. So I do. With all of my trembling hamstrings and erratic breathing and daydreams of upward bow or full lotus or a headstand that is neck-happy, I do my work. I do my practice, safely but still as locked out as ever, and I think less of the fact that I can't hold my leg straight, waist-high by my big toe. I try not to think of anything. I breathe, and I listen and I try not to think.

Every morning before the sweating and puffing, before the invocation, I light a candle. Just one for now, another comes later, but I light it and see it and take it into me. I consider the fire, and what fire does, as an agent of destruction and creation, and at its best perhaps, transformation. I breathe that flame into me, hoping that the yoga will burn off the junk I don't want or need anymore, hoping that the therapy, that all the hip opening and forward bending, and even the occasional twist, will help me be free and stay humble. If not, I guess the practice will have given me another chance to detach from expectations and results.

*please don't mistake my goodnatured exaggeration for a lack of devotion to yoga. I know the eight limbs, they matter to me and I take them all seriously. But not too much so.
Posted by Jessica Young at 12:30 PM