I started drafting this post days ago while I was in LA, but couldn't find the time to finish it until I arrived back home. In the first few days of being in LA I celebrated the marriage of some dear friends, I did some intense Anusara (?) yoga, walked up and down Sunset (boulevard), had a smoothie at a juice bar, eaten feasts of vegan gluten-free delight, bought some fashion that feels authentically LA (even if it isn't), and most importantly, spent some lovely time with dear friends who've been the most generous and gracious hosts.

I've also been auditioning LA as a city I might be able to call home.

I can't help it. I do this every place I go: Maui, Columbus or San Francisco. I wonder what it would be like to live there--where do people shop for groceries, what do they do for work, how much is a gallon of gas or a pack of cigarettes. (FYI, I don't know about the smokes, but gas is 5-10 cents cheaper there than here.) I've been wanting to try to make a life in LA for years. The first time I went out there it was 2006: I was in grad school and I'd taken my first trip to California ever. It was a tremendous trip. 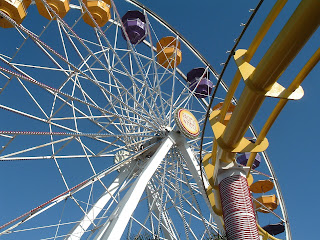 I went to the Getty Museum and the Hollywood Bowl and the Santa Monica pier (see photo above)and the Huntington National Library. I had a snack at the In n' Out Burger. I ate a coconut cupcake the size of my head at the Brite Spot Family Restaurant and I walked through Los Felis with a close friend--the same friend who just got hitched. I was astonished by the kind of grimy, mountainous beauty of LA. I fell in love with the city. Since then I've been back several times, and each time I wonder, why don't I live here?

This time it's a little different. I have a full life now, a life more full and more demanding than I did the first time I visited here. I feel like there is more happening with me, to me and for me in my home city of Chicago than there was six years ago. I have a family, I have a home. Los Angeles doesn't feel like it sparkles and beckons the way it used to. But somehow that doesn't keep me from feeling, still, like LA might not be a right move for me.

One of the things I noticed this time around is that people are really thin here. Not anorexic-thin, or junkie-thin, but 14-year-old-who's-late-to-puberty thin. I wonder if they're hungry--I used to know someone who went to Chapman University in LA, and she said all she remembers is being hungry all the time. I've been feeling really old and Midwestern and obvious, like I don't blend at all. I looked closely at the people around (Silver Lake, Los Felis, West Hollywood) and they all seemed to have this sharp, edgy, superCool fashion sense that feels unattainable.

Another thing I noticed is the longing. It feels like it's in the air in a city like Los Angeles: this quality of everyone pulsing with a kind of thirst. (Insert desert joke here.) It isn't the same kind of bald ambition that I feel teeming the streets in New York, or the who-do-you-know hunger in DC. It's a kind of dusky orange, shimmering, breezy longing. It is so hard for me to put my finger on what it is, but I felt it so many places. I saw it on the faces of strangers and acquaintances, I heard it in the words spoken at parties and restaurants, I saw it in the walk of strangers, I eyed it nestled between the breasts on display in a stranger's wide-open shirt; longing was on every--and there were a lot of 'em--billboard, on the side of every bus, even tucked into the bill of Edward Norton's cute straw hat. (An old friend and I saw him come in for takeout at M Cafe, a hip macrobiotic spot on Melrose and LaBrea. I'm avoiding using the phrase WeHo--like the locals--because I can't bear it; it is too hip for me. Don't be fooled though, the food was great--so nice to have half a menu devoted to gluten-free vegan. I went twice.) Everyone is reaching, grasping somehow. There's no shame in it, and I certainly don't want to instill or provoke any by pointing it out. But I could see it, I could feel it, positively everywhere.

Or was that the smog?

So years ago, seven, even five, I would have eaten this longing up. Not that I thought I could or would "make it" in LA, or even had the ambition to. But I loved the fantasy. I loved that LA was a place of crazy, dirty make believe, that it didn't want or pretend to be anything other than what it was--a locus where money buys satisfaction, where pretty is better than substantive, where the fake is absolutely real. But today all of this longing felt... overwhelming. I've been spending lots of energy trying to give up my fantasies, and to be deluged in the land of fantasy was, at times, fatiguing. I found myself asking, "Where are all the fat people?" (answer: in Chicago.) "Where are all the black people?" (South Central? Compton? isn't that just a stereotype?) "What does anyone do here who isn't trying to get into The Industry?" (um, I guess the same things others do in other places--fight fires, teach children, crunch numbers, splint broken limbs, oh, and write screenplays in their spare time.) I had a really tough time imagining a life in LA like the one I had now.

Life in Chicago is, on almost every day, beautifully livable. When the sun shines, it's a special treat. I can get to a market and back again with some ease. I have a community that is both challenging and supportive and a job that, for all of its insecurity, is still a great way to earn a wage at the end of the day. Yet I've wanted to move to a different place for a long time. I've been in the Midwest for almost my entire life, and I'm tired of it. I want to try something new, I want to get out of the magnetic pull of the bread belt or rust belt, or Bible belt, or whatever the hell belt keeps me tethered to Ohio-Indiana-Illinois. For years LA has been at the #1 spot of cities to move to, for the seedy delight and the reliably sunny and beautiful weather, and the vibe. But moving out of Chicago would mean sacrificing all of the livability that my life has here. I don't know how willing I am to do it, and I can say with certainty that if I moved to LA, I might be swept under by all the longing, and wind up erasing all of the self that I'm discovering and caring for these days. I might just give into the great clothes and shoes (not you, Fergie) and status and image, and I'd forget that I'm a person, and not just another facet of cool. 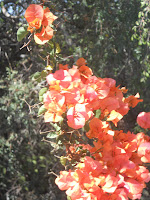 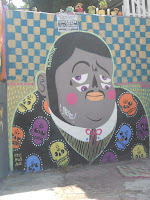 Don't misunderstand me. LA and I aren't breaking up; the ubiquitous yoga, the volume of healthy food, the weather alone is enough to keep me interested in life there. What I think I mean is that I saw the real underbelly of LA this time around. I saw some quality of desire that felt like it had the potential to shift me into a place that isn't healthy for me, and I'm not grounded enough not to want or need all the image for sale. I'd buy into all of that too easily and suddenly, and without thinking or trying, I'd become someone I didn't like or recognize.

So someday, LA, someday we'll have our moment. But not today. Right now we both have growing to do.
Posted by Jessica Young at 3:18 PM