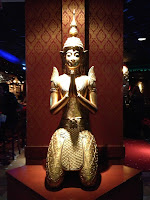 Recently, I interviewed this incredible woman, who teaches workshops in the Chicago area and areas farther flung, and in our time together I learned so much about meditation and the body-mind connection.

(A brief sampling: for meditation to be effective, you need to "sit" for at least eight minutes--five won't do, it takes eight for your body to achieve the kind of brain waves that can be useful to you; it takes seven times the amount of energy to start something that's still into motion than it does to keep it moving--so the better you can work to start you way toward your cushion, each day or habitually, the better you'll be able to keep going; hugs (go with me here, there's no kumbaya) are a meaningful part of development because people need touch--you need four hugs a day for survival, eight hugs for maintenance, and twelve for growth; and this one blew my mind: most thought or feeling patterns only last two to three seconds. The truth is a thought can't consume you unless your grip on it is too tight.)

I'd had my own fledgling meditation practice for a short while, about five-plus minutes of quiet sitting--sometimes with a mantra, sometimes without--post-yoga practice, for a while, but her workshop really tuned me up. So I've been at it pretty faithfully, for over a month now (?), and it seems that well, it's just practically impossible for me to sit quietly and not engage what's running through my brain.

So I have a habit: I have a time when I sit, a place where the energy collects and the vibrations are higher, I have a few physical talismans that put me in the mood, I have the comfortable posture all of it. For a while I felt great after-meditation: I would bound off my yoga mat and into my day, and all day long I'd have this insane amount of energy to draw on. Sharp-focused, engaged but not intense, present: I felt amazing. But it's harder now. I keep trying to increase the amount of time I spend on the mat, and damn it's tough. The sixty seconds between eight minutes and nine feels like a gulf. I swear, this morning, I was positively panting waiting to hear my sweet little alarm ring.

I blame the iPhone.

Ugh: the new digital device which holds a crap-ton of my life in it, that yes, I'm super-happy I own, but that still introduces this jittery, digi-voiced energy into my life at times when I'd rather just be digging the sounds of waves crashing, you know? There are affirmations that I have on my Notes, there's the timer, and occasionally, I plug into the device and tune into a Metta meditation or some other kind. Also, I use it as an alarm clock, and I have the habit of just "checking in" on the world first thing in the a.m. before I hit my mat. This is no good. There's some language here about negative ions, and how I need one of those giant salt crystal lamps to kick all that crap out of my bedroom and my life so that I can rest, wake, wash and dress without dying to know who said what on FB or what's on my Twitter feed.

There's been a rather large technology influx in my life, and I can't figure out how to integrate it. How do I make the analog and the digital work together? How do I use my smartphone(s) mindfully? I've tried a curfew, but that doesn't work. Thankfully, My Favorite's not rolling his eyes and admonishing me too strongly, but it's happened before and it's coming again, I'm sure. This doesn't even mention all of the thoughts that go running through my brain at top speed when I'm trying to achieve quiet (my feet are cold! what's for breakfast! what are you going to do about that student!!! are you still mad at her/him/them! yes you are! that's itchy! shut up! no, YOU shut up!) it's totally nuts in there.

Trust the process, all my hippy artist friends say, and I believe that too. Do the work and detach from the results, says the Yoga Sutras. I believe that for sure. Still, this is really hard.
Posted by Jessica Young at 11:07 AM