My prayer for FB 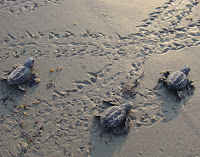 My husband says that social media is like reptilian communication. Mammals like us have a few babies, we nurture and feed them to the best of our ability, we carefully try (and fail) to prepare them for survival in the world. Frogs, turtles, snakes, even bees and cockroaches--which are invertebrates, I think--have zillions of babies at a time. (Remember that science special, where all the little sea turtles hatch under the full moon, and they book it to the water's edge, hoping to survive to adulthood, and not be snatched up by a sea lion or a sea gull, or whatever preys on baby sea turtles?) They put lots of offspring into the world, hoping that even a little of it will be safe, will be fed, will grow to fruition, will survive. This is Twitter, this is Facebook, says my husband: we put lots of words out, with photos or links, 140 characters or more at a time, out to the ether, populated with lots of our friends and acquaintances  hoping that it falls on someone who is listening and will echo back our "Mike check!", who will pick up what we are putting down. Sometimes this kind of communication makes for wisdom and poignancy. Sometimes it makes for bullshit.

This morning, I logged on to Facebook, and after less than five minutes, I felt like I needed a silkwood shower. By now, many of us have read all the punditry on the Oscars: the bad (not just badly crafted, but offensive) jokes of Seth MacFarlane; the high saturation of white men in the academy/nominated/winning academy awards; The Onion, etc. So there's nothing I can say here that's new about it.

Except this (and it's probably not new): I watched my FB and Twitter feeds while (somewhat)watching the Oscars, and I was discouraged by the amount of vitriol that was on them: lots of witty, sardonic, even angry commentary, from some really bright minds. Let me be clear: I was not discouraged by the language pointing out what was damaging or inappropriate about that cultural experience we call the Academy Awards. I was discouraged by the hard-edged contempt I witnessed in its expression, the acerbic tearing apart connected to this kind of chastening.

Facebook is really good for this. There are times when it's a place to post pictures of your kid, or your dinner or some beautiful sunset. Then there are times when it's a place for you to take shots at people. These times are often when people with power or influence are behaving badly, are saying things like "legitimate rape", or are deriding a dedicated, gifted performer on her body type, or calling a nine-year-old girl a name that no woman, no person, should ever be called. In calling this kind of appallingly bad behavior out, we recognize it as deeply damaging, and we let our disgust or fury cloud our humanity. We climb on our soap boxes and wag our fingers, righteously, to be sure, and sometimes the momentum takes us away from a place of mindful chastening and into a place of sanctimoniousness.

I don't have a problem with using social media as a platform for politics. I do it. All. The. Time. I am often profane, exceedingly bossy, frequently misunderstood and occasionally thoughtful. I say what I think when I think saying what I think will contribute an important--or sometimes absent--voice to the dialogue that's taking place. When I don't think my voice will contribute, when I think it'll just get all bickery and bitchly, (or when I feel I'm not being heard) then I try to shut my mouth, because I think that kind of energy is damaging for everyone. I believe in social media as a platform for political, social and cultural change. I believe deeply in speaking truth to power. I believe in righteous anger. I believe in holding our leaders, our representatives, our colleagues, our entertainers, our athletes, our voices with microphones, to their responsibility as people with the eyes and ears of the country, or the world. I believe that when someone with spotlight (power) is behaving badly, he or she should be held accountable.

I also believe in compassion. In nonviolence. I believe in the conscious, consistent and enduring effort of all of us to remember that we are the same. I could water it down, or wrap it in Sanskrit, or quote some holy person from another time or culture that we all revere, but ultimately, what I'm saying is I believe that we, you, I, are(am) no different than the racist/misogynist/homophobe against whom we are railing or fighting with our language on FB. No, no different.

We may know something that they don't know, but that doesn't make us different or better, it just makes us better informed. All these things we know: the wisdom of recognizing that love is love, regardless of who shares it; the accurate historical perspective of knowing how this country really came to be, and who is being left out of its historical and current narrative; the witness we've borne to the fact that for centuries men and women have been marginalized in America at the convenience and comfort of a minority, and that this is damaging our nation for generations to come; the broad-mindedness not to require that our morality dictate the behavior of the bodies or lives of millions of other people. We know all this! Yay us!

But we learned this, right? I didn't come out of the womb knowing that "Love one another" really means another, not "another who has the same political/moral views that I do". It took work for me. If it didn't take work for you, then either you're lying, or you were born under a lucky star(and if so, touch my hand so I can get some of what you got). I had to work at these lessons, and in my work, I said some offensive things that I know hurt others, and that I'm ashamed of. I am still in the process of broadening my heart and my mind, of learning how to see everyone with Divine Eyes. I had to learn inclusive speech, I had to learn that the self-hatred I inherited isn't my birthright, I had to learn about equality: because we live in America, not Utopia. Some of us haven't learned these lessons, yet, lessons that you and I take for granted. For some of us it's harder, and we whom have learned have to make space for the struggles of others. Chastening is not teaching without some compassion, it's just a lecture or a fit. Some people have chastened me with compassion; I learned from them. Others have chastened me without it; I learned to avoid them.

It's Facebook. Maybe I'm taking it too seriously. That's what my mom would say. But I don't think so. Those of us who post with fury about racism, misogyny, homophobia, civil rights, education, reproductive justice: for us it's no joke. It's a way to speak our truth. Not to take it seriously might be disrespectful. When I feel like I'm not being taken seriously, I want to throw things. So I have to take it seriously.

Yes. Yes, you do have a right to your anger. I don't know what it's doing to you on the inside, but it is absolutely your right. Someone hurt you, someone took something from you, someone left you alone, someone used you. The system fucked you, because undoubtedly, our system fucks people. No one's listening to you. You are tired of being marginalized, objectified, hyper-sexualized, manipulated, sold, consumed and ignored. I understand. I agree. I often feel the same way. Be angry. I am angry. I am with you in your anger.

This is my prayer for Facebook: Facebookers, speak your truth. Do it thoughtfully, do it often, and if you are angry, be angry, and speak your angry truth. But if your truth does not have compassion at its core, does not have compassion at the center of every word, then the truth is just as damaging and as violent as the racists and misogynists and homophobes to whom you speak truth. Additionally, and perhaps more importantly, it is completely ineffectual at reaching the people you hope to reach.

Maybe we don't want to reach people, or change hearts or minds. Maybe we just want to smash each other in the face with 2x4s.

That's not what I want. I want someone who will speak truth to power compassionately, grounded in the knowledge that we are the same.

That's exactly why we should give it to them. 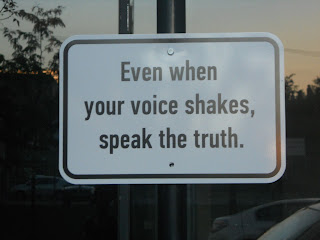 Posted by Jessica Young at 4:40 PM