So only seconds ago, a good friend, Ted, sent me this NPR article about Bryant Terry and Jidan Koon, and Afro-Asian food fusion as an expression of Afro-Asian love. (Sidebar: Bryant Terry is one of the reasons I became a vegan. He gave a speech/cooking demo at the College where I teach, and it was just as I was thinking of becoming a vegan. He laid all this wisdom on my head about the connection between African American Culture and plant-based food, which was music to my ears. I also remember being super-excited about meeting part of an Afro-Asian couple. Interracial Love!!)

I love this article. I've never made jung before. My husband, who's Chinese-American, says that in Chinese it's a different word, something having to do with stone, that comes from a legend of a boy who drowned in a river. You wrap food in banana leaves so it looks like stone, and you drop it in the river for him so he has something to eat.

This YU30 challenge has given me the opportunity to think a lot about food, not just as a means of feeding myself so that I don't faint during class or while writing and editing. This week I'm thinking about what being a vegan means for me culturally. 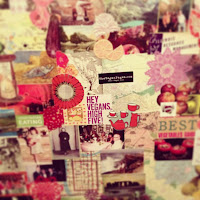 Lately I haven't been able to stop talking about this book, Sistah Vegan. It's an anthology edited by Breeze Harper, wherein black female vegans write about the connection between race, culture, food and activism. My vegan journey has included lots of research, from PETA to Happy Cow, to tons of other veg-heads out there who are trying to find the best way to do vegan for themselves. The info was sometimes useful, sometimes just entertaining, but so often it lacked a lens of cultural awareness. Bryant Terry's lecture at my alma mater (and current employer) gave me this wonderful sense owning veganism as something that my ancestors had practiced*. After this, when I read Sistah Vegan, I got really excited about the idea of veganism as a political statement, as a means of reclaiming my own body--as an element of my identity--from a system that would seek (and has) to control, alienate and objectify me.

I was recently in a popular vegan joint here in Chicago, and saw a four-top of black women breeze in, each more beautiful than the last, and exuberantly join their sisters at a table for kombucha and vegan flautas (or whatever they had--that's what I had). I get excited when I see black vegans at restaurants, or even just black folk dining at vegan restaurants, because I feel the rhetoric behind the plant-based movement in this country is so, well, white. The majority culture shouldn't have the stronghold on lifestyles that are good for the planet and good for the body. Self-care is a right that all of us have--in general principle, but definitely not in practice.

Anyway, what I noticed about these women, besides impeccable makeup, painful-looking high heels and shopping bags, is that several of them were wearing fur coats. Ugh. I've never liked fur; the idea of wearing a pelt on my back has no spiritual significance for me, nor has it ever made me feel like I've arrived. It just gives me the willies. But historically, fur coats are a sign of wealth, even opulence, within the black community.

So what does it mean that some of these women wear fur into a vegan restaurant? I'd be foolish to assume that anyone who steps foot into a vegan restaurant self-identifies as vegan. My husband doesn't self-identify that way, but he eats at vegan joints with me all the time. So it probably means that they aren't vegan, these fur-wearing sistahs. But do they think themselves vegan? Can you be a vegan and wear fur? What's the priority in veganism, your cholesterol level, or the compassionate treatment of animals everywhere?

A passage in Sistah Vegan addresses this idea, and asks sistah vegans to show compassion to those sistahs who aren't vegans (or at least aren't yet vegans) because they're holding some idea of their own struggle being vindicated. You know, when I was little meat was expensive, so we never had it. Now I got my shit together, bring me a big-ass steak, because I earned it with my degree and my career, that sort of thing. What's needed here is understanding for these wounds, and compassion for their eventual healing.

I like so much the idea of veganism as self-love, self-care; veganism as ecological responsibility; veganism as compassion for other living animals; veganism as a revolutionary act. (Here's what I mean by that: the black community is being decimated by food-related illnesses faster than any other in America. To care for myself is to reject the systems that would try to destroy me feels revolutionary, feels like an upraised fist.) I want to see myself reflected in the American Vegan zeitgeist. I don't, and every time I'm reminded of this, it bums me out.

So I'll continue, with my microphones, such as they are, to live a life that is clean, for the animals, for my body, for my planet and for my people. Slowly, maybe the majority-culture vegan movement will begin to see me, and other black vegans like me, and other vegans of color, and maybe this movement will become inclusive not just in name or concept, but in deed.


*When I talk about ancestors practicing here, I want to be clear. The appeal for veganism isn't "people have lived this way for millennia, which I often hear as an explanation of Paleo. I don't think the fact that something is old is a reason to do it. Slavery is an old institution, but I'm not on board with it, nor am I on board with eating the way early man did. I haven't had to run for my life... ever, thank God. The next time I get chased by a sabertooth tiger, I'll think twice about Paleo ;)
Posted by Jessica Young at 12:53 PM