sexy sex-sex and the holy spirit

This week I bought a magazine at the market called Spirituality & Health, and the cover story's about finding the sacredness in sex. It's an interesting magazine, and I've never read it before, but it seems right up my street: a healthy dash of yoga and energetic work, with a balance of major world religions.

So this article, "In Pursuit of Sacred Sex", was what was really compelling. It started by discussing this Mormon who went to a Tantric sex workshop without his wife--who was uninterested in getting down like that, but wouldn't stand in his way--and by the end of his thread he'd become a teacher of sacred-spot massage (which is a tidy way of saying someone who teaches people how to find and massage women's G-spot and bring her to orgasm). There was some discussion of polyamory, a great section profiling Dan Savage and his work, and a couple of hetero couples who spoke about the kind of switch that they went through with sex before and after marriage.

(While it was interesting to read, it was also covered in suggestive pictures of flowers. Think Robert Mapplethorpe meets Georgia O'Keefe.) 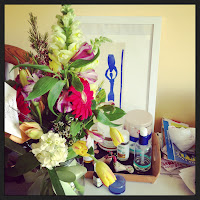 The Christian church is notoriously bad at dealing with sex, regardless of preference. What I learned about sex from the church wasn't helpful at all. It was really rooted in a masculine framework: friends and relatives would quote scripture from Paul's epistles at me, about how it's better for "man" to be single, so that he can more effectively do the work of God, but if he's going to "burn with passion" then he should marry--but not fuck around. One of the experts in this article, Lisa Fullam of the Jesuit School of Theology blames the church's shame-based attitude around sex on Saint Augustine. "There is nothing which degrades the manly spirit more than the attractiveness of females and contact with their bodies," he said. Ugh.

Is there some connection between the current backlash against women's bodies in American politics, and the stiff, repressive nature of sex in The Church? Probably, but I can't say for certain. This article makes a great point of sharing that Christ treated women really well. He hung out with anyone who would care to keep company with him, and he treated Mary Magdalene and other women like people. This was pretty revolutionary, given that his own posse treated women as servants and nuisances. Funny how easy it is for us to talk about being like Christ, but really forgetting--or sidestepping--the real example that he was to others, in his actions and words. In my experience, the churches I attended didn't do a great job of framing sex as anything but a sin.

I remember my mother telling me that if I got pregnant I'd have to move out. "This house was built for two generations, not three", she said. I came of age in the '90s, and AIDS was still unknown to her, a disease not infecting black women as frequently as it is now. The worst thing that could happen to me was a baby, not illness, not abuse, not a loss of self-worth. To her credit, she also taught me what a condom is, and how to use one, and she put me on birth control in high school. I don't think she thought I would lose my virginity in high school (and I didn't--that is, losing my virginity was a part of my senior summer, a graduation gift to myself, if you will), but it's nice that she equipped me with the basics.

I remember a young man, maybe 18, getting up in front of the congregation and confessing that he'd gotten a girl pregnant. He was crying, blubbering, while he stood beside one of the assistant pastors. I don't know why he did that. I don't know if someone made him, and I remember, even then feeling so sad about how much shame he seemed to be drowning in. Why is this so bad? I remember thinking. I never asked, because I knew the answer I'd receive, but still, I was disappointed that this guy felt so bad about his actions. What a disappointment he must have felt to the congregation, but if sex had been framed differently for him, maybe it wouldn't have been so bad. Maybe he could have chosen to have a baby, rather than having a baby dropped into his life. (No, we're not turning this into a conversation about abortion. Later, later.)

When I began reading the article, I hoped that it would be more about pre-marital sex than about sex inside spiritual individuals and relationships. It wasn't. Every sexually active couple was married, or at least Partnered. Losing my virginity was difficult: I got a handful of lectures from my mother, based on the frequency with which she knew I was having sex, and I got browbeaten with the New Testament by a Christian girlfriend.

I've been sexually active for fifteen years. I have great sex with a man who loves me well, but I'm still shedding  some of the guilt that was my inheritance from a largely Christian sexual education. I don't feel guilty for having sex, or for enjoying it, but there's some unlearning that has to happen about roles and experiences. To say nothing of my partner and the kind of baggage he brings into our bed. I hope for life experiences, and spiritual experiences, that can help us enjoy sex for all it has to offer, the endorphins, the closeness and the holy connection. I guess we just have to take it one position at a time.
Posted by Jessica Young at 7:30 AM