Am I Trayvon Martin?

Like so many of the rest of us, I've had the verdict and its effects (micro and macro) on my mind since it was announced last week. I've read some of the articles and essays, I watched the speech President Obama gave--a longer, more thoughtful reaction to the news--and on the way to lunch on Saturday I stopped by the rally in Federal Plaza. 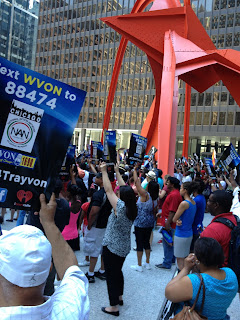 It was really interesting. I hadn't planned on going to the rally, hadn't even known about it actually. I figured that all the rallies had happened already. But I walked through the Chicago streets, dazzling with sunshine, listening to the faint buzz of a helicopter overhead, until I arrived at Dearborn and Adams. Lots of people holding signs, as you can see, and a male voice on the microphone. Lots of different kinds of people were there, which I found encouraging.

I didn't stay long. I didn't carry a sign, or text anything to any number. I listened for a moment, and then I walked across the street and joined my husband for lunch.

We spent most of our time talking about what "justice for Trayvon Martin" actually means.

I've heard/read a lot of folks saying, I am Trayvon Martin, as well as I am not Trayvon Martin. I can't really answer that question one way or the other. Am I Trayvon? Am I someone who scares white people who carry guns, and provokes them so that they feel justified in killing me? Or am I not? Am I instead a person who swims in privilege and lives easily knowing that others will always assume the best about me and treat me like a human and not a stereotype?

Some days I'm Trayvon Martin; some days I'm not. I think it generally depends on who else is around. There are absolutely women (and maybe men) who view me as a threat and not an ally.

I feel really convicted by some of the language that asserts that we all perceive young black men as threats, as animals and monsters. I think about what happens inside me when I walk down the street among black men... I say to my shame that I want to be the person who sees my father, my brothers, my uncles and cousins, and sometimes I am that person, sometimes I do see them. But sometimes I see the guy in junior high who used to push me around at my locker; sometimes I see the guy in high school who used to grab my ass uninvited. Sometimes I see the guy my mother warned me about, the man she feared, and probably still fears. This is really complicated for me. When I consider this, I wonder if I'm being asked implicitly by this dialogue to separate my womanhood from my race. When I feel this way, I remember the words of Audre Lorde:

"There's always someone asking you to underline one piece of yourself - whether it's Black, woman, mother, dyke, teacher, etc. - because that's the piece that they need to key in to. They want to dismiss everything else."

If Audre Lorde says I can keep all parts of myself, then I'm gonna, 'cause she speaks the truth.

As a woman, it's hard for me to feel safe all the time. I'm happy, I'm friendly, I like to smile. I don't like having to think about whether my skirt is so short that it will invite a man to stare at me. I like to talk to strangers, but I don't like being hit on by strange men. In fact, there's only one man whom I enjoy hitting on me; I liked it so much I married him. But maybe this feeling is borne of ego. Maybe it's just pure arrogance to think that every man who speaks to me on the street wants to take something from me. We are all human. Not every man is a sexual predator, and to treat them as such is to disrespect the diversity of human beings.

When a man calls me "Sweetie" and I can't see his face because I'm not sure which voice came from the five of them; when a man my father's age compliments my locs and asks me if he can wash my hair as I am headed to work; when I have to walk through a group of men positively vibrating with youth and testosterone: it seems impossible to feel safe. How can I not want to defend myself against what I perceive as a threat?

I don't (often) shout obscenities at strangers. I don't imagine that every man who passes me on the street is rigid with desire and only seconds from ravishing me. But I don't want to be groped. I want to wear a strapless dress or miniskirt without fielding comments about my body, or hearing the phrase "asking for it" from anyone.

I feel trapped by this bind.

It occurs to me that this is exactly what happened to Trayvon Martin. He was taken, objectified and possessed by another human being. I still can't make sense of the fact that a grown adult could fear a teenager, armed only with a can of iced tea and a pack of Skittles. I don't understand. I read a headline asking if our country will ever heal from this. I wonder who's really hurting. It sounds crass and dispassionate, I know. I know the Martins are hurting. I know (some) people who thought America's race problem was over are hurting. I know black people are hurting; but ours is a different kind of hurt. The hurt that makes Trayvon like Emmett Till. Black people are accustomed to our community suffering in a way that no other is here in America. Some of us are not surprised. That doesn't make us hurt any less, though.

As you can see, I'm all over the place about this. I suppose at the end of it all, I know my privilege, I know the metaphoric weight of my body--its race and gender--in the world, and I know that others' perceptions of me is something over which I have little (but not zero) control.

I know it is difficult to walk this earth and assume the best about people, and still protect myself from negativity, in any form.
Posted by Jessica Young at 11:04 AM