I've written about my hair before here, right? Is anyone else tired of the black female body being not just belonging to Michelle or Maria or Denise or Kendra, but being a political battle ground for beauty standards, gender stereotypes, racial identity and feminism? I am so tired of the rhetoric.

Tired of it, yes, but that doesn't mean that it goes away, or that anyone else just gets it, simply because I'm tired of explaining it. I appreciate the frustration of those who say, "It's no longer my job to explain to you why your ignorance offends me. Go read a book, go get an education." I get that. I've probably said it, and I've recently heard it, or something like it. Still, I believe at my center that if people are going to connect in a genuine and lasting way, if relationship and discovery and learning are going to bring about genuine change in our thinking and behavior, then each of us will have to willingly wear the responsibility (dare I say it? the gift?) of teaching other people what they do not know. I never want to make anyone feel ashamed of their ignorance, even if it does offend me.

So for the last eight years, I've worn locks. (Not dreads, nor dreadlocks: locks. The difference? Locks are a style named for describing the process of hair locking onto itself in a tailored structure. Dreads are an imperialist name given to Caribbean citizens by British colonizers who considered their hairstyle "dreadful". Let's decolonize the style, shall we, by banishing the term "dreads" from our vocabulary.) I locked in 2005, during graduate school, when I was looking for an opportunity to really get to know myself, my hair, to open my arms to my physical experience of what my beauty was and is.

I've worn my hair locked through seven apartments, two boyfriends, one (!) husband, nine months of engagement, three-plus years of marriage, five years as an art school faculty member, eight years of yoga practice, two broken friendships, two broken relationships, travel to 13 states and one master's degree. It's been an eventful eight years. In that time I got lots of compliments. Some were genuine and grounded in a sweet sense of appreciation, and many were from sisters who were also natural or locked. Some were from people who'd never seen someone with hair like mine close up and marveled at me, a bit Venus-hottentott-ey. I've lost count of how many times a white person reached a hand into my head--without asking--and touched my hair. It made me nuts--can you tell by the context clues?

Lately, I've been thinking of cutting them, my locks, off. I learned that some traditions hold that you only cut your locks under a momentous occasion: someone has died, a relationship has ended, you've made a major life change. (I liken the shearing of hair under grief to an old biblical practice. In the old testament, when someone was grieving, they'd cut off all their hair, put on sackcloth instead of their clothes, pour ashes on their head and sit by the city wall and wail.) Fortunately, no one has died nor am I overcome with grief. But life change, I can get on board with some of that.

2013 has been a big year for me so far, and I don't know what the last four months are going to hold. Still, I feel like change has been a part of this year's m.o. 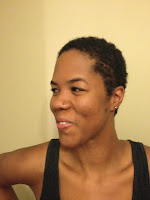 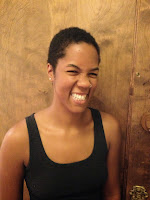 I did it myself. I bought a pair of scissors and a set of clippers and I stood in my bathroom and cut them all off.

Hours before, I asked my husband to take a photo of me, in all of my waist-length, eight year glory. Then, I said thank you and goodbye to my hair, and I cut each lock, one by one. 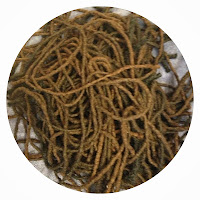 
So how big a deal is this? I don't know yet. I know that my husband is still looking at me mildly bewildered, but he hasn't burst into tears (which is what my mother did the first time I cut off my hair. I should give her a break. Her sense of identity--mine and her own--has been caught up in physical appearance, and especially hair, for as long as I've known her.) I know that my head feels lovely, and I feel beautiful. I know that I will have to ward people off touching my head without asking, and I will try to do it gently, but sometimes I will fail. Not much else has changed. But I feel good and I look good.
Posted by Jessica Young at 8:00 AM