Because I miss records

I've been thinking a lot lately about ruts. And yoga mats. 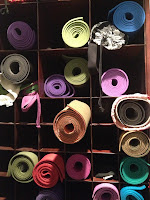 I bought a new yoga mat recently. I was crazy about my old one, crazy about it. It was red, my favorite color, and heavy and cushy and it would unroll beautifully on any practice surface, and with authority. It was made of rubber and I never slipped on it. I loved it. It felt like home. It felt like church.

But I also beat the hell out of it. Maybe because I have stiff hips, or because my knees don't touch the ground (yet?) in down dog, but after years of practice I wore holes in that mat. Big holes.
The ones at the front where my hands go were there, but less obvious. The ones in the back? Insane.

They became the kind of tracks that I would step into whenever I would come to my mat: landing spots for every vinyasa; markers for how wide my legs should be in many standing poses; they were like friendly, but deep, ditches. 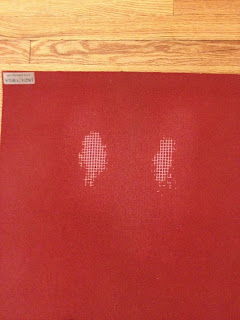 For a while they were lovely. Then I began to feel they were just ditches. My feet would find their way into them, even if I'd tried not to. I wondered what kind of bad habits, what kind of bondage, was my practice experiencing by virtue of these ruts, these ditches on my mat?

(Oh yes, friends, it's a yoga metaphor. You thought you'd had enough.)

So in the circles I run in, there's this TED video--we show it to our students and reference it in discussion about story, about privilege and inclusion--called "The Danger of the Single Story" by Nigerian writer Chimamanda Adichie. I've probably linked to it already, but just in case, I'll include it again here. Read through, and then watch it: 20 minutes of power, vulnerability and conviction. So when I consider the ruts on my yoga mat, I think about the single story my mat/practice is telling. "THIS is the front of the mat and THIS is the back. THIS is where your hands go and THIS is where your feet go. THIS IS HOW IT WORKS."

In the Hindu tradition, there's a a word, samskara. Samskaras are "subliminal activators", and are often describes as seeds in the mind. They're the kind of ruts that exist in our consciousness that create patterns of behavior. We like to think of ourselves as free agents exercising our will, but samskaras are just the little ruts into which the tires of our existence and consciousness get stuck and we act without thinking.

Now I don't want to descend down a karmic rabbit hole or anything--and we really could, because we find that we perceive life the way it is based on our samskara, based on our past learning and how we react to various triggers; our actions aren't the result of our big, brilliant brains and our passionate wills so much as they are the ruts we've grooved deep into our consciousness, which is really what karma means, but we're not quite going there. So I'm going to oversimplify, and probably screw this up some, but here's what I'm trying to say. Our reactivity to certain stimuli is conditioned by our past experience. You have (yet another) difficult conversation with your boss, and before you know it, you've emptied a pint of Ben & Jerry's, and your mother's voice is thundering in your ears; a friend thoughtlessly points out a flaw, and the next night you're waking up naked beside some woman who's name you've forgotten. It's because our consciousness is operating on the single story, and it's often buried so deep that we don't know why we slammed a pint of gourmet ice cream or had mindless, disconnected sex with a stranger or snapped at our kid when he patted our (larger than we'd like) belly with affection.

So there are dozens of single stories I'm telling myself right now, or perhaps, asking why I tell myself. (Because really, I'm not done reinforcing bad and narrow perceptions, that would just be too easy.) There's a single story of the family I was raised in, and what it will always be because of what it was; there's the single story of the writer, or the teacher, and the question of how much flexibility is held inside these labels; the single story of all the roads as yet untraveled, and who I get to be versus should be if I wander down each one, or all of them.

There's a lot of mis-perception caught up in all this, right? This is one of the things that I love about yoga. It is a practice by which I am given the opportunity to see the world, my relationships, my self, reality, as it really is. through cultivating awareness and observation, it helps me call my attention to the places where I'm stuck, and allows me to ask why I'm stuck there.

Ruts are easy. It's no fun trying to pull yourself out of a mental, emotional or behavioral ditch. But think of how much progress you can make when you're not stuck there anymore.
Posted by Jessica Young at 7:00 AM